When a group of humans who share a similar interest get together on a regular basis, it is often called a "club". Needless to say, Cats thought of the idea first, and some of the cleverer humans have discovered that we have our own. Listed below are the ones that the humans have identified, along with their names for the clubs. For security reasons (in case this document falls into the hands of a human) the ones they haven't identified have not been listed. As with humans, Cats are not restricted to membership in one club and may belong to many. Each entry consists of a brief description of typical club members, the average human's reaction to a member's activities, nicknames for club members, and the club's motto.

Bad weather, in the form of rain, snow, and/or excessive cold or heat, is always the fault of the humans. If the weather is inclement when the human opens the door to let you out, back away hastily and try another door. See also the "Door into Summer" Club. Be sure to stare accusingly at the human during this session. If all doors have the same bad weather and you manage not to get booted out, hop onto a window sill and gaze mournfully out at your domain. Then try again in about half an hour.

Being a kitten is probably the best time of a Cat's life. As a kitten, you can do almost anything and get away with it because, as the humans say, "Aww, (s)he's so cute!" Practice the "butter won't melt in my mouth" Look of Total Innocence now, as it is much more effective than when you are full-grown and "should know better". Even if you are caught in the act of some mischief, the Look can can considerably reduce the scolding, and if mixed with the appropriate amount of fake penitence, get you picked up and cuddled.

Be sure to make full use of all your excess energy by tearing around the house at full speed, attacking anything that moves, climbing the drapes, scooting across tables, counters and shelves, taste-testing plants and cords, and generally driving the humans crazy. When exhausted, flop down anywhere comfortable and sleep. After waking up, eat and continue the fun! You will quickly learn that night-time is the best time for playing because so many things can hide in the shadows.

When marking your territory (spraying or plain urinating), make sure that it is in a place which the human *must* notice, such as the middle of the bed, on wallpaper, or against the fabric of a sofa or chair. Marking your territory is important if the human is silly enough to bring "company" for you inside the house. YOU are king of the household, not the human, and if the human has any Catsense at all, it will know this. Also, if the human has washed the blanket or other item which you have marked, be sure to wait a couple of days, and mark the item again in the very same place. 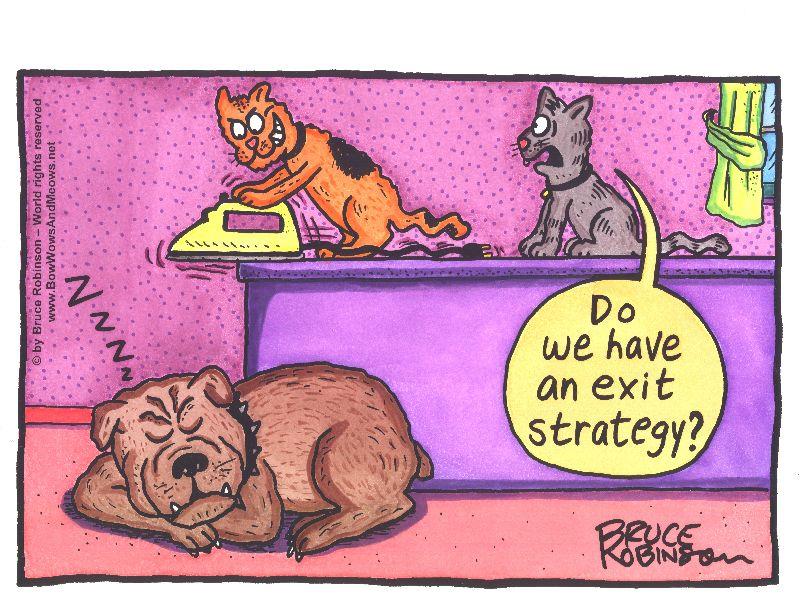 As a species, dogs are animals which are in every way inferior to Cats. They are noisy, smelly, dirty, totally dependent on humans, and stupid (have you ever seen a Cat tangle with a skunk at all, let alone more than once?). Unfortunately, they are also for the most part larger than Cats. They are aware of their inferiority and quite resentful of it, using their greater size to harass Cats by chasing and/or barking at them at any opportunity in feeble attempts to make themselves appear superior to their betters. Dog-baiting can be a vastly entertaining sport if the dog is safely tied up in its yard or inside its human's house. A Cat with nerves of steel can perch on a window sill and wash him/herself while the dog within hurls itself at the window on the other side in a frenzy of rage. Of course, should the human inside let the dog out, said Cat had better have somewhere to run for shelter! Of course, this is not to say that Cats and dogs can't be friends or even live with the same humans, especially if both are raised from birth with each other, but these are exceptions. If you are on friendly terms with other cats, you can cooperate with them in dog-baiting to lure the dumb beast into a spot where you can all beat it up together. This can be risky if the dog is large and of a nasty temperament, so judge your target carefully!

Humans enjoy decorating our homes with plants, which is a good thing because they make the rooms look more like the great outdoors and you can rest beside them in the window and look more like the wild thing that you are. Many are also good for snacking when you're in the mood for munchies and the food bowl is empty. Unfortunately, many can be quite poisonous to Cats, so be very careful what you choose to sample. The last thing you want is another trip to the Vet! Because humans value their plants, they can be used to enforce discipline with threats to knock them over, off shelves, or by pretending to nibble them. If there are plants in the bedroom, they can be used to wake the humans by getting up close and rustling the leaves loudly and, when you have their attention, starting to push the pot off the shelf. Be prepared to run or dodge the squirt bottle though, as they can be very protective of their greenery. Freshly cut flowers also add colour and life to a room, and present opportunities for snacking (though again be careful of the poisonous ones), discipline (see above), and general Hampering by forcing the humans to put them out of reach before they leave and hence slowing them down. Be careful though, as the vases contain Cat Solvent that could splash you when you tip them over.

Humans need to know basic rules. They can be taught if you start early and are consistent. You will then have a smooth-running household. Send other rules or suggested modifications to me, Harold Reynolds. The original author of the small list of Cat Rules is Cynthia Whitney, originally published in the October 9, 1989 Family Circle magazine. The following agents of the Cat Slave Intelligence Service have made valuable contributions to the Cat Rules, at great risk to themselves:

Illustrations contributed (with many thanks!) by Paul J. Lareau, and placed by Laurie Miller, former maintainer of the The Malcolm Cat Protection Society (in Cyprus) WWW site.